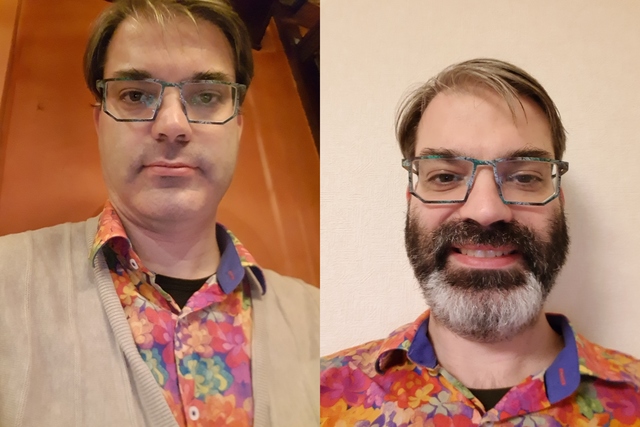 I've never let my facial hair grow past 2 days. Unexpectedly hospitalized for appendicitis, it seemed moot. Now that I'm no longer sick, I'm leaving my decision on whether to shave or not to The Internet.
Weigh in on the options...

I was recently hospitalized for appendicitis. It was agonizing at first. It was hard to sleep. I wasn't allowed to drink even a bit of water for the first several days after admission. My mind was operating very strangely. It occurred to me, as I was neglecting parts of my usual routine, namely shaving every morning, that it would be kind of interesting to take a poll of my friends whether I should keep my nascent beard or not.

Then I thought, what if I asked people to really put their money where their opinion is? The thought of a dystopian future in which the most trivial life choices were subject to the whims of internet funding did cross my mind, but I also realized the idea could be useful even for some more serious decisions... Like when an author tries to decide which project to work on next, or when musicians weigh what kind of collaborations their fans might respond best to. I had a lot of time in a hospital bed and limited cognitive faculties while operating on 500 calories a day of IV fluids, but I pursued the idea.

And since I'm not a famous author, musician or indie filmmaker, I stuck with the beard thing first. Sorry, I'm a bit dogged when I come up with an idea, however terrible. Humor me for a bit and we'll see where we can take this.

This site is currently in its earliest experimental stage. Want to be able to post your own Choice when we're available to a wider audience? Make a pledge of any amount, and you'll be first in line for any early-stage testing and you'll probably have a lot of input into the first couple of rounds of feature work. Questions/Problems/Bugs? Shout at @JasnTru on Twitter or Ochokochoi.com's Facebook page.