Should I Beard Or Not

I've never let my facial hair grow past 2 days. Unexpectedly hospitalized for appendicitis, it seemed moot. Now that I'm no longer sick, I'm leaving my decision on whether to shave or not to The Internet.
Tweet

I keep the beard. Depending on how long I'm committed, I may need to do occasional trimming, but you're voting for Hairy Jason.
Pledge...

It's got to go

I shave off the beard. I stay clean-shaven (except for that unavoidable 1 o'clock shadow...) Maybe you won't fix my fashion sense, but you can restore my grooming habits.
Pledge...

Which one will make the cut?

The answer depends on you. Every dollar pledged is treated like a vote.

You make the call. Make a pledge for your preference...

How did we get here

Fortunately, I’m covered by Japanese national health insurance, so the hospitalization and initial tests worked out to about $600 or so, plus some follow-up tests that’ll probably cost about $150. If I go broke, it won’t be from medical bills, unlike at home in the US.

Unfortunately, as a freelance software developer with a pretty small client base, I could neither meaningfully work or prospect for clients while in the hospital. Living off of about 500 calories a day in IV fluids for 2 weeks put a damper on my ability to concentrate, and I couldn’t exactly walk out of the hospital to meet with clients. That means I’ve basically got no pipeline of work for the next month or two, so I’m a bit nervous.

I woke up feeling pretty ill on December 12 and didn’t bother to shave. By the time I was admitted to the hospital, I thought, Why Bother? I don’t need to impress anyone. But since I was a teenager I’ve never gone for more than a day without shaving.

In fact, my youngest child has never seen me this hairy. He was initially slightly terrified by my furry face, and he’s still a bit skeptical. He’s gotten a little more used to it by now, thankfully, or I don’t think I’d have come this far.

One sleepless night in the hospital, I thought, what if people could vote whether I keep the beard or not? I know not very many people are likely to take much interest in my grooming choices, but maybe on a whim some of my friends would throw me coffee money to try to sway me one way or the other.

Pretty simple. People vote with their dollars. Whichever choice gets the most dollars, that’s what I do.

In principle, when it comes to running a democracy, I favor a one-person, one-vote approach, and consider pay-to-play lobbying abhorrent, but when it comes to allowing internet strangers to make decisions about my life, however trivial, my rule is “show me the money.” It should be your rule too.

If you vote, you can choose what’ll happen if your preference loses. I can refund your money, or not, or a couple of choices in between.

What’s in it for the voter?

If you have a suggestion on better premiums let me know via Twitter @jasntru or the Ochokochoi Facebook Page. This is still an experiment. Maybe I can send you some fancy snacks from Japan, for a price?

(“Contribution” refers to whatever the effective amount you’re sending my way, net of any refunds.)

How long will you stick with the outcome of the vote?

What happens if you raise nothing?

Well, this is just a little experiment. I’d be thrilled even if building this site only results in a friend or two effectively buying me a cup of coffee.

What if there’s a tie?

Hiromi, my wife, is the ultimate tie-breaker.

When does the bidding/voting end?

I’ll keep voting open until about February 14, unless I have some sort of terrible site malfunction that makes me rethink things. Whatever happens, let’s call it a Valentine’s Day gift to my wife and to the world.

My “progress” so far

Once I was in the hospital, I started taking selfies, since the whole having more than 2 days hair on my face thing was new to me. Here’s what the progression looked like. 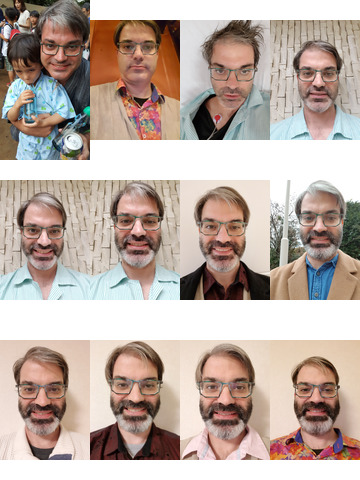 It's got to go
All Choices